Getting in almost 5,000 steps - of the 10,000 step goal recommended by the American Heart Association for optimal health benefits - is no big deal with one of my favorite walks through the South of Broad neighborhood in Charleston SC's famed historic district.  The views are enchanting and it can be easy to forget that these are indeed vibrant living and working streets. As a point of safety, remember to use the sidewalks and the crosswalks. Now ... let's take a walk!

Start right at the Four Corners of Law, which is the corner of Meeting and Broad Streets, aptly named such for the four buildings anchoring the intersection:  City Hall, Charleston County Courthouse, The Federal Courthouse and St. Michael’s Church. This corner provides great views down Broad Street toward the Old Exchange and Provost Dungeon.

Broad Street has always been a demarcation line between the older city and the newer boroughs.  It was originally named Cooper Street but was changed to Broad because people kept referring to it as the “Broad Street”.  It’s 72 feet wide and certainly one of the wider avenues compared to the criss-crossing side streets and sinewy alleys that make up so much of Charleston.

From the front of St. Michaels, head east on Broad for one block.  Turn right onto Church Street.  You will see the famous Charleston Hat Man on the side of 47 Broad Street (former home of The Boutique -one of the best places for locals to find gifts and catch up on neighborhood news!).  Turn around and have a look up Church Street, beyond Broad Street, for a lovely view of the St. Phillip’s Steeple. This is one of my favorite views and is a popular shot for tourism photography.  Then, keep walking.  It will be tempting to stop at Goat Sheep Cow for a decadent bite of imported cheeses or charcuterie platter - but save it for a treat after you've met your step goal!

You will notice some beautiful homes like The Heyward Washington house at 87 Church Street where George Washington stayed on his tour of Charleston (the city of Charleston rented it from Thomas Heyward and Washington stayed there for a week before heading back on his presidential tour).  It’s a museum that boasts some of Charleston’s finest antique furnishings and the garden is one of my personal favorites in Charleston.  It’s hidden away behind the house and feels like a step back in time.

A little further down is Cabbage Row on the right at 89-91 Church Street.  The tenement was made famous from Dubose Heyward's "Catfish Row" of his famed novel Porgy  (which inspired Gershwin’s Porgy and Bess). Now you've arrived at Tradd Street.  Here is an interesting tidbit: Tradd Street is the only street that intersects the entire peninsula.  Cross it and find yourself in the absolute heart of a historic working residential neighborhood.  These are real homes and not historic replicas!  Charleston is a well preserved city. But, be careful what you say … I’ve lived on Church Street before and trust me when I say that with my window open, I could hear every word spoken on the street below.

Before you get to Water Street, have a look down Stoll’s Alley.  It’s charming!  It’s a public street that you can pretty much reach both sides of if you stretch out your hands.  Water Street is aptly named because it was the Vanderhorst Creek before it was filled in to become a street.  Once you curve across Water Street, Church Street turns into the only bricked street in historic Charleston.  It is still a driving street so proceed with care!

Meander down to where Church intersects South Battery.  Here you might notice the rather recent restoration of Villa Margherita at 4 Battery which boasted Charleston’s first indoor swimming pool!  Cross South Battery and turn left. Take a lap around White Point Gardens and enjoy the shade of the live oaks.  There are quite a few historic markers and benches for soaking in the views.  As you turn from East Bay onto South Murray, you’ll notice Fort Sumter House.  It started life in 1923 as a luxury hotel and harbors a few secrets … like the one about John F. Kennedy spending three nights with a former Miss Denmark (Miss Inga Arvad) who was suspected to be a Nazi spy.

Continue the lap around the garden until you get to Meeting Street.  Notice the most romantic Queen Anne Style Mansion with beckoning gardens at 2 Meeting Street. It’s Two Meeting Street Inn and was built in 1892.  According to legend, it was financed by the bride’s father.  He left a check on her pillow!  It’s such a beautiful design and a treat to stay there.

Head up Meeting one block to Lamboll Street.  This first section of Lamboll is called “Little Lamboll” and appropriately so!  It’s tiny.  Thankfully there is a sidewalk but you might have to share it with the feral guinea fowl!    They belong to no one but make great watch birds!

At the corner of Lamboll and King, you might look north and catch a glimpse of the iron work at the Miles Brewton House.  The house is a private residence with a patriotic history. It was commandeered by the British. There are stories from the nineteenth century history in the home.   Mary Motte Alston Pringle’s own letters and diaries weave a story worth reading.

Lamboll intersects with Legare (pronounced “La Gree" which is the Charleston pronunciation and not at all the French pronunciation).  This is another of my favorite streets.  It’s so shady in summer.  Turn right and drink in all the gorgeous homes.  Make a note to take a photo in front of the Sword Gate House at 32 Legare.  It’s named for the imposing famous gates designed by Christopher Werner who understood the order for “two gates” to mean a pair of matching sets of gates.   The duplicate pair were sold to George Hopely and installed here.  And, if you want all your family Christmas cards taken from inside the gate, I can make that happen for you because it IS currently for sale.

Continue up Legare and you will find yourself at Broad Street within earshot of the bells of St. John the Baptist’s Cathedral across the street at 120 Broad.  Turn right onto Broad.  Notice the beautiful expansive garden of the Diocese tucked behind a wall at 119 Broad.  You can almost imagine yourself wandering aimlessly around the the lawn and hearing horse drawn carriages - you actually might have that experience of your own - it is, after all, on the carriage tour route.

Keep on walking.  Continue up Broad Street.  You will cross King Street.  If you need a coffee, pop over to G&M for a pot of French Press.  In one more block, you will be right back at the Four Corners of Law.  Check your fitness tracker and see if you did indeed log the 5,000 steps promised.  And if not ... we can take a walk somewhere else.  Charleston offers up amazing walks.  Have a look at some of our listings 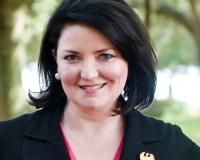 Holly Hamilton was born and raised in Rocky Mount, North Carolina to an entrepreneurial family. She grew up discussing business around the dinner table and started several successful companies in her ....

Top Five Questions About Inheriting Real Estate In South CarolinaSome of our most beautiful historic homes have been passed down through generations of Charlestonians.  It’s fascinating

April in Charleston means alfresco dining and strolls through the historic district.  Do you know about the best kept secret for lunch and light bites South of Broad? It’s Cafe Musique at

Interested In Finding Out What Your Home Is Worth

Getting in almost 5,000 steps - of the 10,000 step goal recommended by the American Heart Association for optimal health benefits - is no big deal with one of my favorite walks through the

Should you require assistance in navigating our website or searching for real estate, please contact our offices at 843-723-7150.

The data relating to real estate for sale on this web site comes in part from the Broker Reciprocity Program of Charleston Trident Association of REALTORS. All information is deemed reliable but should be independently verified.

By registering, you agree to our terms of use and that real estate professionals and lenders may call/text you about your inquiry, which may involve use of automated means and prerecorded/artificial voices. You don't need to consent as a condition of buying any property, goods or services. Messages/data rates may apply.